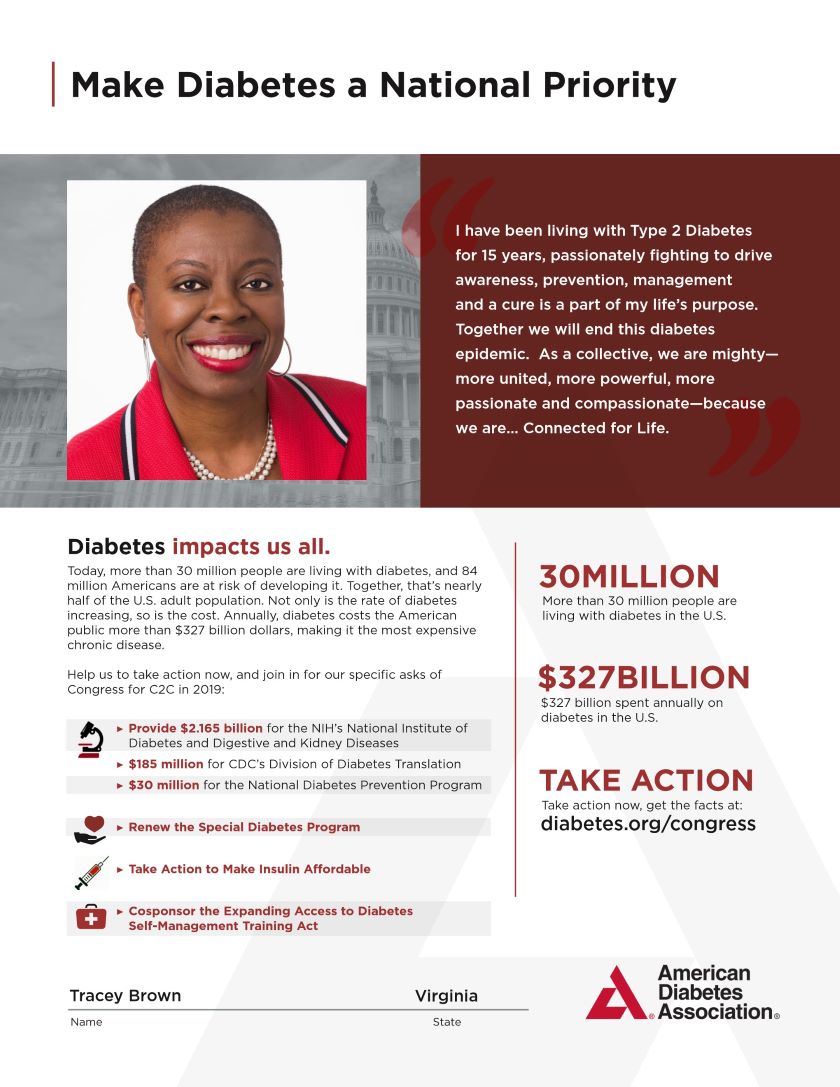 Tracey D. Brown is Chief Executive Officer of the American Diabetes Association (ADA), the nation’s largest voluntary health organization and a global authority on diabetes. Tracey, herself, has been thriving while living with Type 2 diabetes for over 16 years. She is the first CEO in the organization’s almost 80-year history that is living with Type 2 diabetes and is committed to stopping the diabetes epidemic.

Tracey joined the ADA in June 2018 after her tenure as Senior Vice President of Operations and Chief Experience Officer at Sam’s Club, a division of Walmart, Inc., where she was responsible for creating meaningful member experiences, directing member strategy, marketing and branding, go-to-market execution, data and analytics, and membership operations. She brings more than 25 years of experience in driving global business growth, leveraging data to connect consumers with brands, and creating omni-channel experiences to escalate customer loyalty.

Prior to joining Sam’s Club, Tracey was Chief Executive Officer and Managing Director of RAPP Dallas, a data-driven integrated marketing agency. Before RAPP, she served as Chief Operating Officer for direct marketing agency, Direct Impact, where she coordinated strategic, tactical, and overall company operations. Previously, Tracey was Director of Worldwide Consumer Marketing for Advanced Micro Devices, where she drove global marketing and demand generation activity around the world, including China, India, Russia, France, Spain, Italy, and Japan. Early in her career, she served in leadership positions at American Express, Proctor & Gamble, and Exxon Mobil.

Tracey earned a Master of Business Administration degree from Columbia Business School in New York and a Bachelor of Chemical Engineering degree from the University of Delaware.

Tracey has always been passionate about the ADA’s Mission and served as a member of the ADA National Board in addition to volunteering and fundraising for the ADA in her local community.

We are proud to feature Tracey as our lead game changer for this edition. She shared with us recently information about the roots of the ADA, how they are promoting innovation in diabetes, and her vision for the future of organization.

Q:  You’ve only been in your position as Chief Exec. Officer for a little over a year – in that time, what have you found to be the most compelling task ahead of you and how are you beginning to address that task?

A:  You know I’ve been in this position for 16 months and it feels like it has gone so fast.  I’ve always been a passionate advocate for changing the trajectory of this disease and now that I’m at the helm of the world’s most authoritative source, I feel like it’s not going fast enough.  I’ve learned a lot in these 16 months, particularly that it’s the people that make the difference. Our staff is very much tied to our mission, unlike other for-profit organizations.

We have made some serious impact in 16 months.  In 2018, we had the best financial performance ever.  We rebranded our brand, realizing that people wanted to connect with the ADA in a more meaningful way, so our site has more value now.  It’s simpler and easier to use, and there are more engaging features. We launched legendary partnerships, like with the American Heart Association (AHA).  Nancy Brown, the CEO of the AHA, and I have no competitive worries.  We know what this partnership could mean to us all. Comorbidities with diabetes encompass so many problems, like kidney, liver, cancer, heart, and mental health, just to name a few.  We’ve developed a program called “Know Diabetes by Heart” that connects the dots between the heart and diabetes.

Q:  What projects/programs does the ADA produce that hits a global market?

A: Annually, we hold the world’s largest conference on diabetes called Scientific Sessions. It brings together over 14,000 participants including more than 11,000 physicians, clinicians, nurses, dietitians, CDEs, and researchers. We take a version of this conference “on the road” visiting areas to educate and share professional research.  This past summer, I was in India at ADA Primer 2019 sharing latest innovations, talking with people from the community about diabetes, and sharing my own story, as well as practical tips on thriving.  We’ve done sessions in Korea, Spain, and Africa. I was also invited to speak at the (EMSON) Endocrine and Metabolism Society of Nigeria conference to share my story and resources.

Q:  Other than awareness and management education, what goals does the organization have that aim directly at prevention and cure?

A:  Some of our programs that you can check out are:

We have state agencies or “field offices” in every state and count on them to help us deliver education and awareness programs.  We are a voluntary health organization and our aim is to carry information to every quadrant of local communities, igniting the power of our volunteers armed with programs that make a difference.

Q:  In what way does the organization promote and support innovations in the space?

A:  This really helps to answer the previous question.  The ADA was founded in 1940 by doctors with a foundation in science and research.  Our mission, through research, is to find a cure and help those with diabetes to thrive.  We have supported 300 research projects to help diabetics thrive and we’ve funded early-career investigators. Young promising researchers are who we want want to see stay in diabetes, so we will seed the research to encourage them to stay.  We’ve funded 32 researchers, and of those, we’ve helped to see 10 patents filed. One of these was a woman scientist who had been a chemical engineer for years, but left her career when her daughter was diagnosed with Type 1 diabetes.  Her daughter was complaining about the sticks to test her blood, so Mom developed an award-winning super-thin razor CGM interface and has a patent filed.

Diabetes disproportionately impacts minorities.  We also fund under-represented minority scientists through our breakthrough “Pathways” program to stop diabetes.  This program is the first of its kind.

Q:  What successes are key to ADA’s mission and what do you see ahead for the organization?

A:  Research is really the lens in which we view most everything, as it is our history.  So, funding research and leveraging insights from the community around education and programming support is key.  We continue the fight to make insulin available to those who cannot afford it.

The ADA has been instrumental in helping Colorado to become the first state to cap the cost of insulin at $100.  We now have a blueprint to get the rest of the states on board. After ten years of working on it, we were able to get a law overturned that mandated that truck drivers weren’t allowed to drive if they were on insulin.  We were able to get the US Army to get on their docket to allow children with diabetes to attend government daycare centers.

With all that we’ve accomplished, we’ve realized that the fastest way to bend the curve is to drive prevention.  We’ve partnered with the CDC and the National Diabetes Prevention Program to promote diabetes prevention programs.  There are only 6500 endocrinologists in America, so we know that we need to educate primary care physicians on awareness and management.  We are creating a program to address this.

The current healthcare system is designed to solve acute problems.  Advances in technology are making it possible for people with chronic diseases to live longer…we need a new system to help those living with diabetes.  We’re calling that new system, “the 4th network.” It’s the community. It’s about distributed trust. You get information from people in the community that you trust to give you the right information. That’s the 4th network, and it will take that entire network to bring awareness, prevention, management, and tips on thriving to get us to where we want to be.