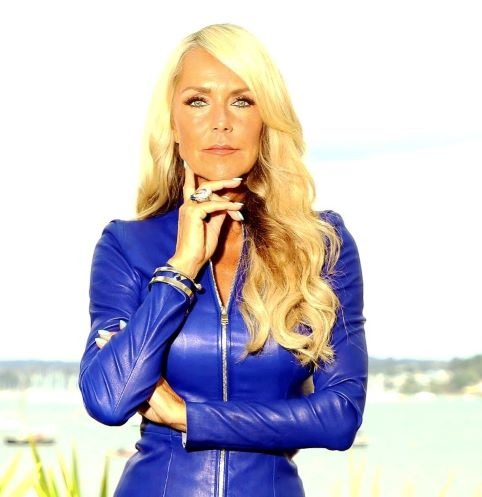 Celia with Royal Navy aboard the HMS Queen Elizabeth

Celia Sawyer is an Interior Designer and the founder of Celia Sawyer Interior Architecture and Design in London. Celia’s company has been discreetly providing both private and commercial clients with bespoke groundbreaking luxury interiors for over 20 years.  Celia has worked on an array of assignments, such as private aviation, yachts, luxury homes, and commercial projects and her clients range from Royalty, (she recently designed a house for the Saudi Arabian Royal family), through to celebrities, sporting individuals and High Net worth executives. In 2017 Celia worked for the Royal Navy where she designed the warrant officer’s mess on HMS Queen Elizabeth. This year will be Celia’s 6th year on National Primetime television, on Channel 4’s Four Rooms (also shown on Netflix USA), Celia was chosen to host her own design show for BBC1 which has also aired in Australia, Europe, and New Zealand.

On a more personal note, and being a mother of 2 children, Celia takes time mentoring school children to encourage them to rise to the challenge of life, and is regularly asked to speak at schools across the UK. She is also involved with many charities, is a Patron for The Children’s Liver Disease Foundation, Women’s Refuge, a board advisor for Football for Peace, and an Ambassador for the British Heart Foundation, where she was also on the committee for fundraising.  She is an Ambassador for The Prince’s Trust (where she has mentored some of the young people) and the Chain of Hope. Celia was recently awarded Global Goodwill Ambassador for Humanitarian Services.  Celia also writes for the Mail Online with a monthly column on luxury interiors.

I asked Celia to share a bit more in her own words.  What follows are her responses.

Q:  You have a multitude of charities with which you work.  Is there one that stands out because there is a personal story attached that drew you in?

A:  Well the most personal association with any of my charities is the British Heart Foundation (BHF) as my father did suffer from a heart attack some years ago, and his father passed away of the same in his mid-50s, so I was keen to help with this charity. Sadly, my father also became ill with Alzheimer’s so it would also be great to get involved with this charity too.

Q:  What was the turning point in your business that put your work more seriously into the spotlight?  And, did that turning point bring with it your philosophy on philanthropy?

A:  It is bizarre, but I cannot remember a specific date or time that my work moved more seriously into the spotlight.  I think it was just purely perseverance and hard work, and it takes a long time for people to recognise what you do and build up a reputation; you sort of reach a tipping point.  Success in work is very important to me and that allows me to give back with my charity work.

Q:  What do you consider when approached to take a leadership role within a charity?

A:  I have meetings all the time with people asking me to support their charity and I really hate saying no, however, if I am not going to have the time with the other commitments that I have already taken on, then it is unfair on everyone to get involved with something new. I also find that I can make more of a difference if I get involved with a charity that already has a good structure.  It doesn’t need to be a big well-known charity; it could be local to me and where I live, but it does need to be structured professionally so that we can garner the most support possible.

Q: How did you acquire the title of Global Goodwill Ambassador for the UK and what type of activities fall under that title?

A:  I was approached by another Global Goodwill Ambassador outside of the UK who invited me to speak to them regarding my charity work. I gave them the information that they required about what I do already and who I support and I was voted in by the group.  I am constantly on a chat with them about all sorts of different issues, whether it is suicide prevention, all sorts of mental health issues, etc, and we all communicate regularly to help where we can.

Q: What is the legacy you are building?

A:  I talk at a lot of schools to students about their future and I think mainly I want to show them that hard work and determination does really get you where you want to be if you want it enough. It is great to mentor even my own 2 children and encourage them not to be afraid of pushing themselves forward and taking control of their destiny.

Content in this publication is provided and approved by those featured with only grammatical edits and minimal corrections for clarity. The publisher, authors, and contributors reserve all rights in regard to the copyright of their own material.